Part 6: Birthdays and Building... these are a few of our favourite things!

It was finally a sunny, beautiful day on June 24th, and as the dig started, we felt a bit reluctant to leave... but Alan's birthday had to be celebrated in style!

Calm as can be... and cool to see the harbour from the water for the first time.

The Lunenburg harbour was completely calm and peaceful as we boarded the fishing boat and headed out to sea, past the lighthouse. Lunenburg has quite a history, if you're interested. The Acadians settled in the area around the 1620s and lived peacefully with the Mi'kmaq until the fight for control of Canada began in the 1700's. You can understand why this amazing, natural harbour was fought over.

Some good-sized cod, a pretty mackerel and a couple of ugly/pretty bottom feeders called sculpin... and quite a few pollock - Alan caught a few of those. We came right over a big school of squid and a few were caught and kept for lunch – pretty exciting, even for our seasoned captain, Bill Flowers! A nice added service by this outfit: they will clean and filet any fish you want to keep – which Bill's daughter expertly did on the boat ride back to shore... so best to bring a little cooler along.

We took the time to have lunch at our favourite spot in town, The Salt Shaker, such a sweet little restaurant overlooking the harbour... and then headed home to see the progress on the build. Wow, these guys move fast.

Our house was built on these huge granite boulders - these stones haven't seen the sun in 103 years!

By the end of the next day, the dig was finished. I watched Alan watching Brian in the excavator work, and commented, "it's every little boy's dream to operate one of those things isn't it?" He just nodded wistfully. LOL Later we watched Brian go down our drive and gently fix where the treads had lifted up soil with the bucket on the front. He could probably pick up a baby with that thing. With all the equipment gone, we could finally visualize the size and position of the new addition.

The yellow lines brought the whole thing to life for me. I could finally get a sense of the space.

The next day the forms for the footings were laid out and later this monster truck arrived, and filled the forms with cement. It's great to be living on-site. We don't miss a thing and Alan is available to answer (and ask) questions – it's super exciting not knowing whats going to show up next!

Look at the size of this beast! Impressive, and controlled remotely.

Two guys were managing the flow, scraping and levelling, and then creating a keyline on top with the trowel and... they were done and gone before noon. These guys are fast! 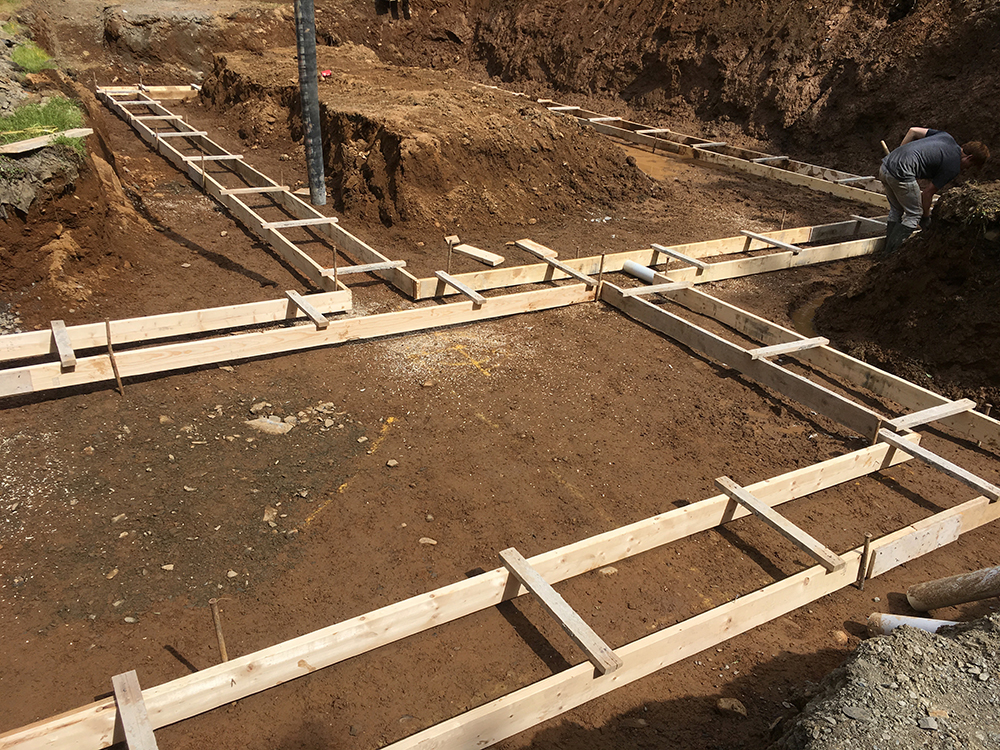 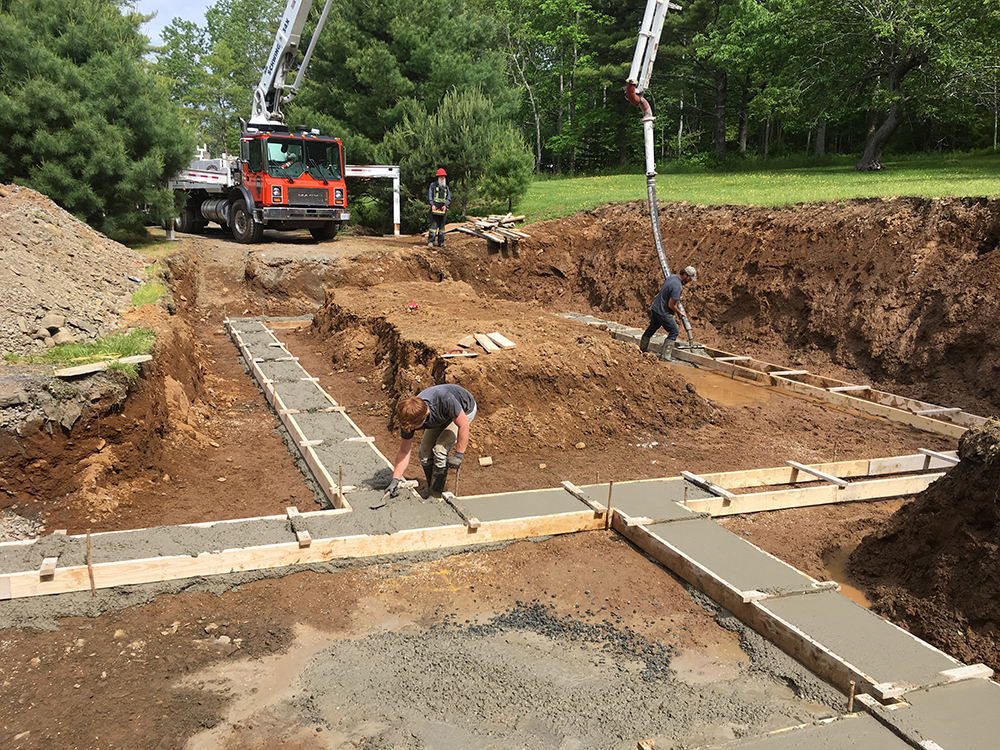 The last stage of the footings process happened the next morning. We're so impressed with the site management, as each machine arrives to do its part... this time, a gravel-spewer! Who knew that was a thing. Maybe lots of people, but I did not. The footing forms were removed and the gravel was blown in. Quick, efficient – basically shot gravel in and around all the footings and up the back wall.

And that's where things sat for a few days. We had more rain but apparently, the footings are fine to take moisture at this point. Well, makes sense... they will be underground soon.

The July long weekend was upon us. It was rainy and cool... but that didn't stop us. Off we went on another day of exploring! This time we took the LaHave ferry across the LaHave river – its about 15 minutes away and crosses just before the river opens up to the ocean; a sweet little cable ferry, $7/car and takes about 10 minutes to get across to the town of .... LaHave. They weren't all that inventive with names around these parts. LOL This little area is bustling this time of year with the LaHave Bakery and a few lovely art shops. We almost always stop at the bakery, but on this day, we were headed to Ploughman's Lunch (curiously not named LaHave Lunch). It's a quirky, hippyish kind of vibe and the food is fantastic. They actually raise water buffalo and sell the meat and cheeses. We bought some sausages and are interested to try them; can't say we've ever had Water Buffalo. The entrepreneurial spirit is alive and well here, but not well-known. We keep discovering 'well-kept secrets'.

Petite-Rivière Winery. We did not know that Nova Scotia had vineyards until we moved here and the wine is quite lovely too.

After lunch, we headed to Petite-Rivière Winery. So lovely, you immediately feel like you are in Provence as you look out over the vineyards. And here's a little-known fact: The LaHave River Valley Wine Region is recognized as one of the oldest grape growing regions in North America with vineyards dating back to the 1630's.

Wednesday, July 3, and another birthday! Mine! Sadly, Alan was really sick, but it was a gorgeous day and I just had to get out on the water.

So off I went to Blue Rocks – a really sweet little fishing village just outside of Lunenburg, and went on a kayaking tour with Pleasant Paddling – super outfit and great guides; this is a really interesting area. It has fascinating geology with folded sedimentary rocks with contrasting bands of blue, grey, brown, black and green. There were several 'red lion' jellyfish in the water – so beautiful to watch as they pulse through the water.

We stopped for a break on a small island with a wild rose bush. Reminded me of 'Wild Rose Alberta'.

A wonderful thing happened after I got off the water. I stopped to take a few photos of this pretty little fish shack out to sea on this perfect summer day... and this old couple who owned it came out to say hello.

Blue Rocks is such a pretty area - a favourite spot for photographers and artists.

Their accent was so thick I could barely understand them – real traditional Nova Scotians. They were so sweet and friendly and just wanted to visit and ask where I was from... when I drove off, they were standing there waving at me like I was a long lost relative. It made me feel so happy. That's what it's like here. Really warm people. All these tourists are milling about on their land taking photos and no one seems to mind at all; I don't see 'no trespassing' signs hardly ever.

When I got home, more progress on the build!

The forms for the foundation walls were already built. I guess the footings inspection went well. Inside the forms you can see steel bands and rebar. I wonder how many times these forms have been used to build other homes??

Two days later, the forms were filled. Again, the super cool cement pumper truck arrived (probably NOT the proper name), its huge arm reaching over and around our trees to swing over to the forms; managed by remote control by a guy that we have affectionately been calling "ZZ Top" :) And I guess that's a back-up cement truck at the end of our drive (look how beautiful the cove is on this morning ... super calm).

So here we are on July 5th, and our foundation walls are now curing. You might think that watching the build, blogging and traipsing across the countryside is all that we've been doing. But business must go on! We joined the Lunenburg Board of Trade and are looking forward to getting involved. There is an initiative to promote "Lobster Season" to boost tourism in this area over the winter since lobster season on the South Shore is from late November to end of May... and we'd like to be onboard with that. We've also been making some headway with the Chamber of Bridgewater - volunteering to create their quarterly newsletter AND we have a meeting with the Town about how we can help with the new 'Energize Bridgewater Plan'. Bridgewater just won a $5 million prize from Infrastructure Canada for this plan, and we'd like to be a part of it. One of the best ways to meet other business owners, network and build your credibility, especially when you are new to an area, is to get involved in the local chambers and boards of trade. They are always looking for people who are willing to volunteer.

Festivals and events are in full-swing here. We've been spending a lot of time trying to figure out where the best 'live music' might be and sadly, we have only found mediocre performances (apart from LAMP which has been awesome)... but we are certain that talented musicians are not just in Halifax! We suspect this might be another 'well-kept Nova Scotia secret!" ... not to be daunted, we have been perculating an idea of a central source to find 'live music'... but more on that later.

(To continue the story, go to part 7)

Part 14: The final push and our 'black beauty' is home!

Part 13: All hands on deck and... a difficult anniversary.